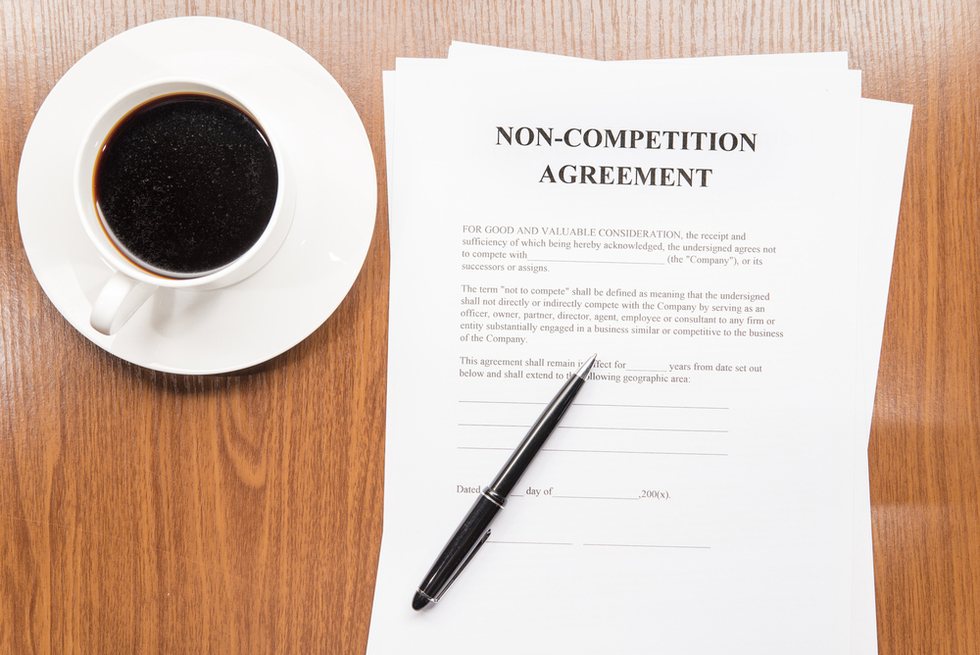 What is a non-compete clause?

A non-compete clause is a contract law term that seeks to protect a business via the limitation of potential competition. It is also referred to as a non-competition clause or a covenant not to compete. Non-compete clauses are customarily used by businesses as a tool wherein, in the event an employee leaves the company, the employee promises not to work for a rival employer for a designated period of time and within a certain geographical area.

Non-compete clauses commonly occur collaterally. When a business is sold to a new owner the new owner most likely does not want competition. They do not want the previous business owner to open up a rival shop next door in the near future. So, by design, the clause's intent is to limit competition.

Is this ‘tool' that limits competition enforceable or even legal? In Texas, that all depends on the reasonability of the restrictions. The Texas Business and Commerce Code regulates non-compete agreements. In order to be legally binding, the non-compete clause must include specific limitations. Typically, the three limitations that are reviewed by the court include: the restriction on the geographic area considered in the agreement, the duration of time the restriction is in place as well as the actual activity that is to be limited. The court reviews and decides upon the reasonability of the aforementioned restrictions in the non-compete clause.

If the court holds that the non-compete clause is valid and a breach existed, the court may impose damages and injunctive relief. Damages are a pecuniary compensation for a suffered loss. Injunctive relief basically requires a party to do, or not do, a particular action that breaches the term of the clause.

The traditional employment arenas where one might expect to find non-compete clauses include the fields of corporate sales, medicine and technology. As reported by the New York Times, there is now a trend wherein a greater number of employers, in a variety of fields, use non-compete agreements more frequently. The usage of non-compete clauses fanned out to many other fields, including lawn pesticide maintenance work, camp counselors and even some college internships.

With restrictions on an individual's ability to work come the concerns about the impact on a free market. Massachusetts is so concerned about it that the Commonwealth is pursuing legislation that bans non-compete clauses.  Perhaps other states will follow.

How Does Non-Compete Law Affect Employees

Courts are increasingly finding non-compete agreements to be enforceable if the employee's promise not to compete is reasonably related to an interest that is significant and necessitates application thereof for the employer's protection.  Despite that, it appears courts are closely scrutinizing the scope of a contract restrictions and reforming restrictions if they are overly broad or overly restrictive on the employee and their ability to work in the free marketplace. At the end of the day, these cases are intensively fact specific in nature.

The law in this area is complex and in a constant state of evolution.  We must not underplay the importance of provisions that limit (or complete prohibit) an employee's right to work that unfairly jeopardizes their financial security and/or ability to provide for their family.  Moving on after entering into these types of agreement can complicate an employee's job hunt.  Even if any employee finds another job offer they may face the prospect of their former employer initiating expensive litigation against them and even attempting to obtain a temporary order/injunction prohibiting them from working within certain restrictions while the case is pending.  On the flip side of the coin, t is also easy to see the potential for abuse that the company could mete out—hiring an individual under false pretenses in order to eliminate them as competition in the marketplace and then surreptitiously firing them or greedy partners wanting a bigger share of the pie voting one partner out of his ownership interests and then try to prohibit their ability to compete against them as rivals in the field.

At the Law Office of Lori Elaine Laird, PLLC, we are experienced in all aspects of civil litigation, including Texas business law and transactions.   We bring years of experience coupled with the drive to succeed in each and every case we handle, no matter the size of the business. Our attorneys work to resolve issues for: individuals involved in contractual disputes; small, local businesses; as well as large, international corporations. We are dedicated attorneys that focus on the individual needs of all our clients on a case-by-case basis.   If you would like to discuss or have questions regarding the enforceability of a non-compete clause or any other Texas business law matter, contact the Law Office of Lori Elaine Laird, PLLC today at 832-699-1966.